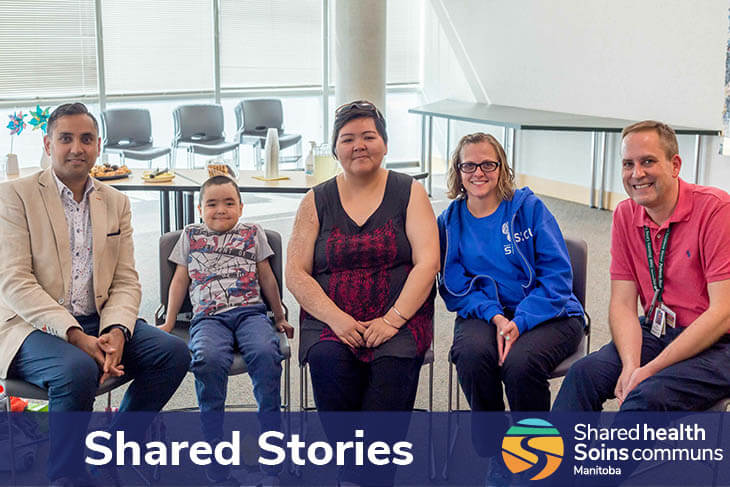 A two-thousand-kilometre journey in search of answers

On the day that would have been her oldest child’s birthday, Nina Kautuq received the answers she has always longed for.

In 2015, Nina, her husband Ike and their four children, aged two to 11 at the time, were camping near Pond Inlet in Nunavut on August 16 when their tent caught on fire. Nina and her children were flown to Ottawa to receive care, while Ike was transported to HSC Winnipeg.

The decision of where to transfer each family member was based on resources available at the time and where they could receive the fastest care possible.

In the days that followed, her family of six became two. Nina and her son Jutanie were the only survivors—three of her children and Ike passed away due to severe burns.

For the past four years, questions about Ike’s passing have shattered her peace of mind.

Teresa Perryman, a former nurse and Nina’s friend, arranged a meeting with HSC’s critical care team so she could meet those who cared for her husband.

In the five days he spent at HSC, the critical care team watched for signs of healing. He received medication to fight any discomfort and help him sleep.

Two procedures were performed to remove burned tissue to allow healthy tissue to grow over those areas.

Dr. Faisal Siddiqui, HSC’s medical director for SICU, reviewed his files before the meeting and said Ike had burns to more than half of his body.

“Ike was very sick when he came to us. His lungs needed more help from our machines and we couldn’t give him any more oxygen. Healthy individuals receive about 20 per cent oxygen from the air they breathe, and he received 100 per cent pure oxygen,” Dr. Siddiqui told Nina at the meeting.

His condition worsened as the days passed: his heart had trouble pumping blood, and his kidneys had also stopped working so he was put on dialysis.

“The person in charge of all the burn and trauma cases in the province took care of your husband. The anesthesiologists, surgeons and the entire intensive care team were all the best people we have,” Dr. Siddiqui said. “Despite our best efforts, I think his body ultimately made the choice. There was a point where his heart stopped beating and we performed CPR. His heart didn’t restart.”

Nina was away in Ottawa receiving care at the time. She never saw his body or had a chance to say goodbye.

“I thought I would never get to say thank you to all of you for taking care of my husband. Thank you very much. Now I understand that you did your best to help him, but he was too badly injured,” Nina said.

The meeting was a small way to bring closure to the family.

“My questions were answered. I don’t feel so tight anymore,” she said. “I have to stop looking for him because I won’t find him.”